Title of the talk (tentative):
" RECENT ADVANCES IN DIRECT TORQUE AND FLUX CONTROL OF IPMSM DRIVES "

Abstract:
With the advancements in magnetic materials and semiconductor technology, interior permanent magnet synchronous motor (IPMSM) is becoming more and more popular in industrial applications due to its high energy density, high power factor, low noise and high efficiency as compared to conventional AC motors. Conventional field oriented vector control (VC) techniques have been widely used for high performance motor drives for many years. As an alternative to VC scheme recently direct torque and flux control (DTFC) technique is developed which is faster and simpler than that of the VC scheme as DTFC doesn’t need any coordinate transformation, pulse width modulation and current regulators. The DTFC scheme utilizes hysteresis band comparators for both torque and flux controls. Both torque and flux are controlled simultaneously by the selection of appropriate voltage vectors from the inverter. However, conventional six-sector based DTFC suffers from high torque ripples due to discrete nature of control system and limited voltage vector selection from the inverter. Control techniques have been developed for hysteresis controllers to minimize the torque ripples but the six sectors still limits that improvement. Furthermore, in a conventional DTFC the reference air-gap flux is assumed constant at the rated value to make the control task easier. This produces erroneous results for high performance drives as the air-gap flux changes with the operating conditions and system disturbances. Moreover, if the reference air-gap flux is maintained constant, it is not possible to optimize the efficiency of the drive.

Therefore, this talk presents a novel eighteen-sector based DTFC scheme to achieve high dynamic performance with reduced torque ripples as compared to the conventional 6-sector based DTFC. In addition, a model based loss minimization algorithm is integrated with the proposed DTFC scheme in order to optimize the efficiency along with high dynamic performance. Eighteen sectors are developed to overcome the unbalanced voltage vector selection of conventional six-sector based system that minimizes the torque ripples. Further, a nonlinear controller with virtual torque and flux controls is also developed for IPMSM drive to minimize the drive torque ripples. The complete IPMSM drives incorporating the developed control techniques are successfully implemented in real-time using digital signal processor (DSP) board-DS1104 for laboratory 5-hp motor. The effectiveness of the proposed control techniques are verified in both simulation and experiment at different operating conditions. It is found that the nonlinear controller based IPMSM drive provides the best performance in terms of torque ripples among all the DTFC schemes. The results show that the proposed nonlinear/18-sector based DTFC scheme would have the potentiality to apply for real-time industrial drives. 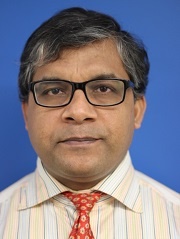 He has been serving as a Professor in the Department of Electrical Engineering, Lakehead University (LU), Thunder Bay, ON, Canada since August 2001. He also served as a visiting Prof. at Univ. of Malaya (2013, 2012, 2011), Tokyo University of Science (2010), Japan and North South University (2006), Dhaka, Bangladesh. Previously, he was an Assistant Professor in the Department of Electrical and Computer Engineering, University of South Alabama, USA from January 2001 to May 2001, an Assistant Professor from 1996 to 1997 and a lecturer from 1994 to 1996 at BUET. He possesses more than 21 years of teaching experience and has authored/coauthored over 185 papers in international journals (32 in IEEE Transactions) and conferences.

Prof. Uddin is a registered professional engineer in the province of Ontario, Canada. Currently, he is serving as an Executive Board Member of IEEE Industry Applications Society (IAS) and Chair of IEEE-IAS-Manufacturing Systems Development and Applications Department. He also served as one of the Technical Program Committee Chairs for IEEE Energy Conversion Congress and Expo (ECCE) 2015 at Montreal, Canada. He was the Technical Committee Chair for the IEEE-IAS [Industrial Automation and Control Committee (IACC)] Annual Meetings in 2011 (Orlando) and 2012 (Las Vegas). He served as Papers Review Chair (2009–2010 and 2013–2014) of the IEEE Transactions on Industry Applications (IACC). Earlier he served IEEE IAS IACC for 9 years in different capacities. Due to his outstanding contributions IEEE IAS IACC recognized him with IEEE IAS Service Award 2015. He also received LU Distinguished Researcher Award 2010. He was the recipient of two First Prize, one 2nd Prize and one Third Prize Paper Awards from IEEE IAS IACC and both 2004 Contributions to Research and Contributions to Teaching Awards from LU. His research interests include power electronics, renewable energy, motor drives, and intelligent controller applications.