Title of the talk (tentative):
" MULTISCALE AND MULTIPHYSICS MODELING OF NON-CLASSICAL SEMICONDUCTOR DEVICES "

Abstract:
As semiconductor devices shrink into the nanoscale regime and new classes of nanodevices emerge, performance and reliability of nanosystems engineered from these devices are fundamentally governed by an intricate interplay of long-range structural and built-in electrostatic fields (strain, polarization, applied and environmental biases), atomistic/granular (defects, disorder, surface relaxation) effects on the bandstructure, quantum mechanical size-quantization, and nonlinear, highly stochastic and dynamically-coupled charge and phonon transport processes. While numerical simulation is playing a key role in semiconductor R&D today, for low-dimensionality devices, modeling approaches based on a continuum representation of the underlying material become invalid. On the other hand, a correct quantum description is well achieved by means of ab initio methods. A manifold of flavors and codes exist (such as ABINIT, SIESTA, PWscf) each of which is adapted to the specific needs of their users. Unfortunately, while offering intellectual appeal, these ab initio materials science methods can only model very small and closed systems having ~100 atoms near or at equilibrium. This fundamentally originates from the complexity of the quantum representation of electrons, possessing several internal degrees of freedom, compared to those of the simple particles used in classical calculations. The requirement of self-consistency further slows down such methodology. Note that, today’s nanoscale devices exploit physical processes at a scale where the number of atoms in the active regionis on the order of 10,000 to more than 100 million[1]! Therefore, modeling of nanodevices, to be adequately accurate yet computationally efficient, must employ a multiscale and modular approach. Also, the plethora of geometry, material, and doping configurations in semiconductor devices at the nanometer scale suggests that a general nanoelectronic modeling tool is needed. 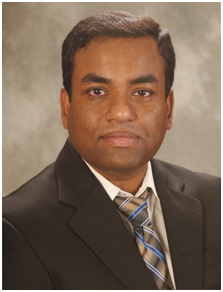 Shaikh Shahid Ahmed received the B.S. degree in electrical and electronic engineering from Bangladesh University of Engineering and Technology (BUET), Dhaka, Bangladesh, in 1998, and the M.S. and Ph.D. degrees in electrical engineering from Arizona State University, Tempe, in 2003 and 2005, respectively. From 2005 to 2007, he was a Postdoctoral Research Associate in the School of Electrical and Computer Engineering and at the National Science Foundation (NSF) Network for Computational Nanotechnology (NCN), Purdue University, West Lafayette, Indiana, USA. In August 2007, Shaikh Shahid Ahmed joined Southern Illinois University, Carbondale, Illinois, USA, where he is currently a Full Professor in the Department of Electrical and Computer Engineering.

Shaikh Shahid Ahmed is the recipient of 2009 Oak Ridge National Lab/ORAU High-Performance Computing Award and his group has successfully scaled their scientific software on more than 130,000 cores in then Jaguar XT5 fastest supercomputing platform in the world. Professor Ahmed has authored/co-authored 11 nanoelectronics software tools (nanoFET, CNTFET, QuaMC 2D, Schred, nanoMOS, FETtoy, MOSFET, MOScap, QPC, nanoSSL, and multiscaleTEC), access to which are freely available on NSF’s nanoHUB.org. As of July 2016, these software tools have served around 14,100 individual users worldwide, running more than 638,000 simulations [https://nanohub.org/members/9293/usage]. Shaikh Shahid Ahmed is the Principal Investigator of the NSF funded Southern Illinois High Performance Computing Research Infrastructure (SIHPCI). He is the recipient of 2013 Dean JuhWah Chen Outstanding Faculty Award from SIU College of Engineering. He has published over 70 papers/articles in refereed journals and proceedings, authored six book chapters, and delivered more than 80 technical talks. Professor Ahmed is a senior member of the IEEE and member of the American Physical Society.